Ryan McNaught, aka ‘The Brickman’, currently leads a team of skilled LEGO® brick artists and craftspeople, creating incredible pieces of art from the small plastic blocks.

As a certified LEGO® professional, one of only 14 in the world and the only one in the Southern Hemisphere, Ryan has been playing with the plastic bricks for decades.

Originally working as a Chief Information Officer in the corporate world, Ryan’s creativity was trapped, limited by the constraints of his job. However, he soon took his ability to express and create with the small blocks to build a giant new opportunity in order to inspire those around him.

Alongside his team, Ryan has helped build some of the most detailed and largest LEGO® brick models, and they have had the honour of building models for LEGO® offices across the globe. They have created models for museums, galleries, and shopping locations, proving the only limit on LEGO is your creativity!

Ryan and his team have won multiple award for their pieces of work, often recognised for their unique style that sets them apart. 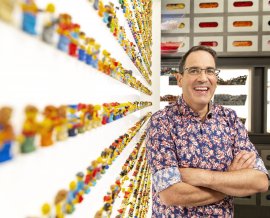