One of Australia's Funniest and Greatest Magicians

Tim Ellis is not only the sole Australian ever to sit on the Jury at The FISM World Championships of Magic, he's considered by his peers to be one of the most creative and entertaining magicians in the world.

Known within the magic industry as "The genius from downunder", Tim is in constant demand to perform at corporate events, but also to lecture at magic conferences and seminars all over the planet.

In 2006 the highly regarded 'Dictionnaire de la Prestidigitation' was released and Tim was one of only two living Australian magicians to be included in this world history book of magic spanning the centuries – along with Orson Welles, Houdini, David Copperfield and Siegfried & Roy.

Since being given a magic set by his grandfather when he was 10 years old, Tim has breathed new life into the ancient art with his delicious blend of comedy and hyperactive spontaneity. His uniquely interactive approach instantly bonds him to audiences of all ages and nationalities and has taken him from the Crown Casino, Melbourne, to the Riviera Casino, Las Vegas, from the Sullivan St Playhouse, Broadway, to Le Double Fond, Paris, from theatre seasons in Hong Kong to multiple seasons at Hollywood's famous Magic Castle.

He has won more awards for his mind-blowing magic than any other Australian in history including 'Best Stage Magician in Australia', 'Best Close up Magician in Australia', and voted 'Most Valuable Participant' and the FFFF Invitation Only Close Up Magic Convention in New York. He also holds a Guinness World Record for the longest non-stop magic show ever... 75 hours!

His life has been a roller coaster ride of magical adventures. Tim has been buried alive, escaped from a wooden crate at the bottom of the Yarra River, freed himself from straitjackets hundreds of feet above city streets, and driven a $100,000 sports car while blindfolded.

He has published magic magazines, produced magic conferences and seminars, consulted for film and television, run several magic schools, appeared in a variety of movies, been profiled in several books, produced a television variety series, released over twenty DVDs, and he even owned and ran the iconic Bernard's Magic Shop for several years.

Recently, Tim was diagnosed as having Asperger's Syndrome, and he explores the positives and negatives of the condition in an autobiographical one-man show 'AspyCadabra' as well as working with Swinburne University on their ongoing project 'Aspergion'.

Tim is currently the Artistic Director of the hugely successful 'Melbourne Magic Festival' and lives in a converted broom factory in inner Melbourne with two rainbow lorikeets Sir Spectrum Sparks and Jackie the Bandit. He plays poker in his spare time.

Tim Ellis was absolutely fantastic yesterday and last night. Everyone loved him and he certainly added lots of fun and laughter to the conference plenary session and awards night. 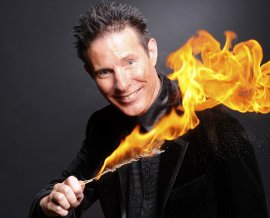