A motivational speaker with a passion for helping those less fortunate

A co-founder of one of the most well-known bottled water brands, Daniel Flynn is a motivational speaker with a passion for helping those less fortunate. He inspires those around him and encourages young people to fulfil their dream, regardless of what others say.

At the mere age of 19, Daniel was dramatically affected by the story of a young African boy who had spent the entire day collecting water which his sisters drank and died due to the contamination. Suddenly aware of his own family situation of which he had two sisters, and the nations own bottled water habits, Daniel joined a team of four other young Australians with the desire to make a difference. From that small group, Thankyou Water was launched, where the profit of the bottled water sales is used to fund water projects in developing nations globally.

The idea for the profits to be used as funding was conceptualised after Flynn noticed that Australians spend 600 million dollars on bottled water, all whilst 900 million people world-wide didn’t have access to contaminant-free water.

After much research was conducted, the small team realised that it would take over $250,000 to start up the business and make it a reality. Many friends and business people told them that the idea would not be realised and that the brand would never be launched.

However, in 2008 major suppliers and distributors contacted the team and began funding the idea.

A few years ago, it took three years for Thankyou water to sell their first million bottles. Now, in one year over 5 million bottles of the water are purchased.

Thankyou Water has so far contributed to 58 water projects across Cambodia, Uganda, Kenya, Myanmar and Sri Lanka. Over 18,000 people have benefited and will now have safe access to clean drinking water for the rest of their lives. In this year alone, without any fluctuation in sales, Thankyou Water will fund over 70,000 people globally.

An app has also been developed and created, whereby the code of a purchased bottle can be entered and consumers are given information about the exact project their bottle of water is funding, as well as the GPS co-ordinates of the village they’re assisting, the current issues the village is facing and the exact water solution that will be provided.

Daniel and his team have visited the projects and are constantly inspired by the families they have met, many of whom have enough water to stay healthy and look after their families for the first time in their lives.

With a strong passion for entrepreneurship, Flynn enrolled in a project management course at RMIT University.

In 2012, he was named a state finalist for the Young Australia of the Year.

Daniel Flynn speaks honestly about Thankyou Water and what challenges were endured and the obstacles overcome to place the water on the shelves. He aims to inspire every individual within the audience and encourages them to make a difference within the world. 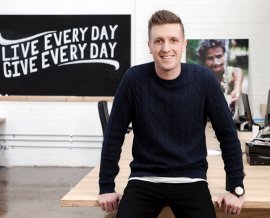