Magic can seduce anyone, anywhere

Liam Power knows that magic can seduce you anywhere. It happened to him in Thailand when he was just 16 and on holiday with his family. He fell under the spell of an American master who had the village roaring with disbelief. Liam was hooked.

In 2007 after performing magic for years as a semi-professional Liam travelled to the U.S.A. to work with some amazing magicians, furthering his professional knowledge and skills. Since then Liam has been peen performing full-time, not just in Australia but across the globe.

One of Sydney’s busiest magicians, Liam was the only magician invited to perform at the Falls Music and Arts Festival. He also performed at 70’s rock band, The Eagles’ exclusive tour party in Sydney. Liam has had the honour of travelling to Cambodia to film a documentary with the Fred Hollows Foundation, highlighting their work and performing magic for people after having their eyesight restored.

With performances in a variety of situations and venues, including; television, corporate events, luxury cruise ships, The Adelaide Fringe Festival, weddings, private parties, sold out shows in Sydney Fringe Festival and Melbourne Magic Festival as well as performing magic over the airways on ABC radio, Liam has the experience and mystique to make your event a roaring success.

Liam’s close up shows are ideal for cocktail parties, pre or post dinner drinks, product launches, weddings, corporate events, private parties and almost anywhere that entertainment is required. Performing close up magic to small groups of guests, Liam. moves around your event actively involving your guests in tricks keeping them entertained, laughing, chatting and being amazed.

It is an intimate performance style and is the perfect ice-breaker. Liam’s close up performances are interactive, high energy and naturally create talk and excitement.

For groups smaller than twenty, another option is to have Liam perform a more formal sit down close up show lasting between 10 and 60 minutes

Liam’s stand-up show is perfect for audiences seated in front of a stage. Liam will entertain your guests with hilarious, mind blowing and unique magic.

His stand-up performances are tailored and can last anywhere from 10 minutes to one hour. His shows can be anything from a stand-alone magic show to a quick session to keep your guests entertained between speakers. The show is always fast-paced, interactive and funny.

Liam performed at our office. Our staff and guests loved the show and were so stunned by the acts! I would recommend him for any function.

Liam performed at our major, annual work function. He was professional and helpful from the booking process right through to the end! All feedback was positive and everyone particularly loved his roving show. No distracting costumes or stage props, Liam lets his magic speak for itself. My mind is still reeling from some of his magic, that can only be described as "impossible"!! On top of that, he is hilarious. We are still talking about it over a week later. Highly recommend him for your next party, work function or special occasion.

Liam wowed our guests with his true talent at our corporate awards night. Discreetly made his way to guests during pre dinner drinks, he was so incredibly good! Many of our national team were blown away, still wondering how he does it. His helpful nature made him a great addition to our event and we would highly recommend him!

We hired Liam for a Corporate event and couldn't be more happy with how the day turned out, thanks to Liam. Lots of laughter, smiling faces and FANTASTIC entertainment. Would HIGHLY recommend for any style of event.

Liam is absolutely awesome. He performed at our staff mid-year party and blew everyone's mind. His tricks make your jaw drop, literally. He works the room and crowd really well. Couldn't recommend him more highly! He is very calm and an absolute professional. 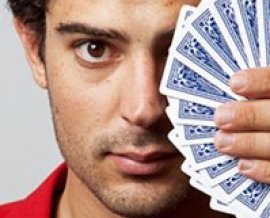