An Australian singer/songwirter duo made up of twin sisters, Jess and Lisa

The Veronicas, made up of twin sisters Jess and Lisa Origliasso, are one of Australia’s most popular singer and songwriter groups. They are a popular choice for entertainment at any event.

Having worked in the world of show business from the age of five, Jess and Lisa first performed as the Origliasso Twins with their appearances immediately gaining the attention of agencies and talent managers.

As teenagers, they released three teen pop albums and made their debut in the television world, landing recurring roles on the children’s series ‘Cybergirl’. In 2002, after receiving a guitar as a gift, Jess and Lisa dedicated more of their time to songwriting and music, transforming their sound from pop to alternative rock.

After forming a band and working with several different collaborators, Jess and Lisa tried their hand at the American market and after changing their name to The Veronicas, they signed with Sire, releasing a full-length debut album in 2005.

In 2015, after some troubles with their record label, the twins released a third album that documented mature lyrics and a new sound. Their first single from the album, ‘You Ruin Me’, debuted on top of the ARIA Singles Chart, becoming their first number one hit in the country since 2007. The song remained at the top for three consecutive weeks and was certified double platinum.

The Veronicas work hard to connect with their audiences and have since released a variety of singles. 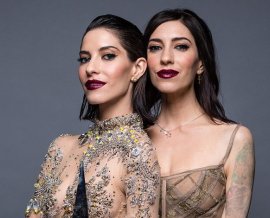