Waleed Aly is the co-host of Channel Ten's The Project and is a lecturer in politics at Monash University.

Waleed Aly is a broadcaster, journalist, author, academic, musician, and one of Australia’s most versatile media talents. He’s also a former AFL mascot.

Waleed is a co-host on Ten’s The Project, and lectures at Monash University as well as working in their Global Terrorism Research Centre. Waleed rose to prominence as a young spokesperson for the Australian Muslim community; he spoke on human rights and multiculturalism within Australian society.

Waleed is a columnist and frequently published political and social commentator; his opinions frequent the columns of The Age, The Australian, The Sunday Times of India, The Australian Financial Review, The Sydney Morning Herald and The Guardian. His debut book, People Like Us: How arrogance is dividing Islam and the West, was shortlisted for several awards including the Queensland Premier’s Literary Awards and for Best Newcomer at the 2008 Australian Book Industry Awards. In 2020, Waleed’s second book Waleed Aly (I Know This To Be True) On Sincerity, Compassion & Integrity was published.

Soon after Aly completed his law degree, he spent a year as a legal associate of one of Australia's most senior Family Court judges. Through this work he saw the devastating effects of violence against women. As a result, he has written a number of articles on this issue. In 2005, Waleed was made a White Ribbon Day Ambassador for the United Nations’ International Day for the Elimination of Violence Against Women and was named one of The Bulletin magazine’s ‘Smart 100’ in 2007.  He was also an invited participant to the Prime Minister’s 2020 Summit in 2008, and in 2011 he was named Victoria’s Local Hero in the Australian of the Year Awards.

In August 2005, Aly was honoured by being asked to address the Australian Davos Connection's Leadership Retreat, where key issues facing Australia are considered. Aly spoke to an audience that included federal ministers, State premiers, chief executives from Australia’s top 100 companies, as well as leading academics and community leaders. In 2011 he was named Victoria’s Local Hero in the Australian of the Year Awards. Waleed’s insights on Islam and Australian multiculturalism are exceedingly valuable – his unwavering determination to foster a better understanding about Islam and Muslims in the Australian community is highly admirable.

Aside from media, Waleed is a music fanatic – he is the guitarist and main songwriter for Melbourne originals band Robot Child and co-wrote the theme music for Salam Cafe. In 2009, he played lead guitar in the world’s first ever theatrical production of Pink Floyd’s classic album, The Wall with Nuworks Theatre in Melbourne, in the process helping to raise $60,000 to rebuild a girls’ school in Afghanistan that the Taliban had previously destroyed.

Waleed is one of Australia’s most respected and trusted intellectuals and is a highly sought after MC. 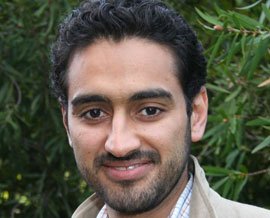