Winning Miss World Australia in 2013, Erin Holland is an internationally recognised model who has graced national catwalks and campaigns for some of the world largest designers and brands. Erin is also a seasoned singer, presenter and dancer, holding vast experience in musical theatre, singing with orchestras, big bands and cabaret.

Miss World is the oldest and largest international beauty pageant broadcast over 150 countries to over 1 billion viewers. The competition covers talent, fitness, modelling, communication and charity and was the perfect platform to showcase Erin's versatility and complete package qualities.

Having studied under scholarship at the Sydney Conservatorium Of Music and completed Bachelor of Music (Classical Voice), Erin is also classically trained in saxophone and clarinet.

Erin has starred in various television commercials for brands such as Nature's Way, KFC, Nespresso, Tim Tam, Tresemme and Slim Right. She has also been a guest presenter for segments on Channel 7's ‘The Morning Show’, and Channel 9's ‘Mornings’ and ‘Today’ shows.

With a charismatic personality, quintessential aussie beauty, and natural talent in front of the camera and on stage, Erin is one of Australia’s most versatile and capable rising stars. 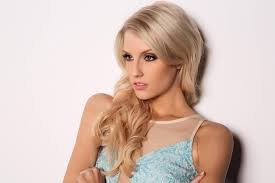