An internationally award-winning magician, with a few tricks up his sleeve

As an internationally recognised and award-winning magician, Dom Chambers is known for his modern take on magic. Posting videos of his performances and tricks online, Dom has created a fan base across the globe. Dom was the first Australian magician to appear on the television series, 'Penn & Teller: Fool Us!'.

In 2019, Dom won the award for Best Magic Show at the Adelaide Fringe Festival for his one-man show ‘RanDom’.

​Described as charming and approachable, Dom uses his wit and skills to win over his audience and surprise them with his incredible magic.

​Dom is able to perform a roving magic performance, getting conversations started and breaking the ice. His close-up magic and sleight of hand creates a memorable experience for all.

His stand-up show combines comedy and magic that is perfect for larger audiences. Dom leaves his audiences mystified, astonished and entertained.

Dom prides himself on his crowd reading, adapting his talents to suit the needs and brief of any event. He has worked at a large number and variety of events, from weddings and corporate events to dinner engagements.

As an MC, Don has extensive experience and is able to work with any crowd of any size, of any background. He is passionate about helping assist in the running of a smooth events, working professionally with all, to create a memorable event. 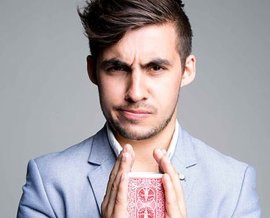