A sensational showman and entertainment spectacular, runner up of Australia's Got Talent

Cosentino is one of Australia’s beloved magicians and illusionists, coming runner up on the 2011 season of ‘Australia’s Got Talent’. With a unique style, Cosentino combines sleight of hand, grand illusions and physical demonstrations for a performance like no other.

In 2010, Cosentino took on one of his most dangerous stunts, an underwater escape at Melbourne Aquarium, which gained him both national and international attention.

Cosentino has astounded audiences everywhere, and has achieved a number of awards and recognitions including a Guinness World Record, a nomination for a Helpmann Award, and a Merlin Award.

With a commanding stage presence and inexplicable personality, Cosentino stands out for other performers. His innovative illusions and performances outstand not only the audiences, but fellow magicians and illusionists.

As a speaker, Cosentino gives audiences an insight into the secrets of his success. He takes audiences on his personal journey, telling them the story of his childhood and progression into the illusionist he his today. Filled with key messages, audiences walk away with take-aways they can apply to their personal and professional lives. To amplify and further emphasise his messages, Cosentino is able to incorporate magic tricks into his keynote.

Submit an enquiry or contact us to book Cosentino for your next event. 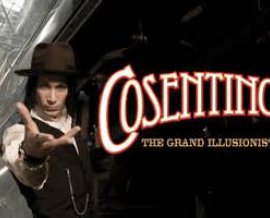