As a TV writer and presenter, Richard Fidler is most known for hosting ABC TV’s ‘Race Around the World’. He was also a member of the comedy trio ‘Doug Anthony Allstars’.

Richard has worked on a number of successful television shows as both a writer and performer, including the ABC’s ‘The Big Gig’, ‘Viva Cabaret’ and ‘Friday Night Live’.

In 1997, he won the Australian Interactive Multimedia Industry Association award for best writer for Real Wild Child, a CD exploring the history of Australian rock and roll.

Richard  currently co-hosts the radio show ‘Cosmopolitan’, as well as contributes to several magazine publications. He has also been seen on Network Ten’s ‘Good News Week’ and ABC’s ‘Aftershock’.

Having worked with technologies and IT, Richard is comfortable speaking on internet issues, as well as acting as an after-dinner presenter, a witty debater, a facilitator or an awards night MC. His extensive list of clients includes Elle Magazine, CPA, the University of NSW, the Pharmacy Guild of Australia, Andersen Consulting, Mincom Software and Apple Computer, as well as many more. 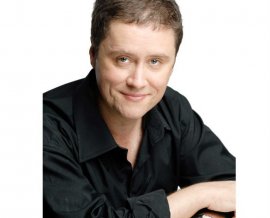