As a lifelong fan and devotee to the music of Queen, Gareth Hill had dreamed of playing the part of Freddie in a live show, ever since his untimely and premature death in 1991. It was with great trepidation that he approached this task, knowing that a less than stellar representation of Queen’s magic would not be acceptable. It had to be brilliant!

Queen Forever, The Australian Queen Tribute Show was formed in 2006. After a few line up changes, hundreds of rehearsals and countless hours of planning & preparation, the band was finally ready in late 2008. And the results were simply spectacular!

With the technical brilliance of the original Queen replicated to a tee and a stage show that brings the brilliance and magic of Queen alive like no other, Queen Forever: The Australian Queen Tribute Show are simply the best sounding, best looking and most technically accurate Queen Tribute anywhere in the world!

Gareth Hill as Freddie Mercury has to be seen to be believed. His mind blowing vocal range, stage antics and amazing likeness for Freddie Mercury are a sight and sound to behold!

Scotty Hotpants as the inimitable Brian May replicates the licks of Brian with such accuracy that even die-hard fans are left amazed! The trusty Red Special by his side, Vox AC30 amp to pump out that huge sound, curly mop to match and a lanky stature to boot, you’ll have to look (and listen) twice…

The ever reliable bass player of the band is played by Darryn McLaughlin… Let’s just say that the staid and sensible John Deacon is played to perfection.

Queen’s drummer, Roger Taylor had a style which cannot be mistaken and Brad Hodge as Roger doesn’t miss a beat… With a replica of the Wembley ’86 drumkit, the blond locks, Raybans and attitude to go with it, it’s ‘almost’ Roger Taylor in the flesh!! 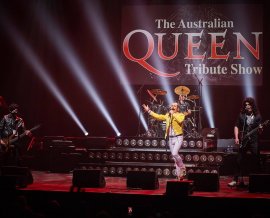