Life IS change, Fear IS natural

Jeff Green is a well-known, award-winning comedian, and has been seen on Australian TV and radio.

In 1996, Jeff arrived for his first Melbourne International Comedy Festival performance and has since become an in-demand and entertaining after dinner speaker, MC and keynote speaker.

Jeff has also been heard on BBC radio as a broadcaster and a best-selling author. His television credits include ‘Spicks and Specks’, ‘Good News Week’ as well as numerous appearances on the Melbourne Comedy Festival Gala.

As a speaker, Jeff uses his comedic skills to produce an entertaining presentation suitable for any audience. He is able to create punchy lunchtime speeches or an evening mix of hilarious anecdotes and pin sharp observations. Jeff is passionate about helping audiences embrace change and giving them new ways to view change as a positive force rather than a negative. He is also a widely sought-after MC, and he is able to seamlessly execute your timetable of events with his trade mark wit and affable professionalism.

As the global pandemic continues, Jeff Green can tailor his presentation to discuss the effects coronavirus has on embracing change. Jeff can present his keynote speech by virtual broadcast to your organisation through videoconferencing, live streaming and Zoom events.

Without Change There Would Be No Butterflies: A Guide to Embracing Change
Jeff is passionate about change, and he knows a thing or two about it. After commencing his working life as a chemical engineer, Jeff moved into a stellar career as a stand up comedian. In the process he became a household name on UK TV and radio, and starred in Festivals and tours across the globe. He then gave it all up to move to Australia and start all over again. Why? And what key lessons about embracing change did Jeff learn along the way? Jeff tells an inspirational, insightful and often hilarious story recounts his negotiation of personal and professional life changing events. His presentation will energise your audience with his clear guide to viewing change as a potent and positive force.

Jeff was amazing. The crowd loved him.

Jeff Green had our audience, both luminaries and young professionals alike, in fits of laughter for the entire time he was on stage. He was incredibly professional, accommodating and easy to deal with and he listened to the brief and delivered. 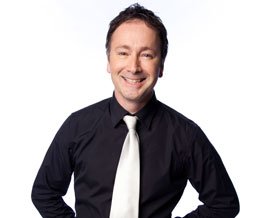