Super-Impressionist Danny has taken the entertainment scene by storm

McMaster is a one-man entertainment phenomenon. He is being hailed as one of the finest in the business today. Danny’s show is a marvelous journey filled with superb music, packed with laughter and seasoned with a hint of drama. Blessed with a magnificent singing voice, McMaster delivers anywhere between 50 and 70, dead-on impressions set to hilarious lyrics and routines, back-to-back without missing a beat.

seasoned world traveler, Danny McMaster, one of the world’s best impressionists, is now back in his native Australia performing after working the length and breadth of the USA. Whether it was headlining the Hollywood Improv, Pasadena’s “Ice House”, the Las Vegas’ Riviera Hotel or corporate gigs in California, Florida, Washington, New York or Pennsylvania, Danny’s been doing it all. Now he’s back home ‘among the gum trees’ domiciled in his hometown of the Gold Coast, ready to go.

Whilst in Hollywood, Danny did ‘identical voiceovers’ for the likes of John Travolta, Robert DeNiro and would you believe Daffy Duck? He also worked on “Mission Impossible II” with Tom Cruise doing Australian voiceovers.

He has performed in front of Prime Ministers, Cabinet Ministers both federally and at the state level, corporations, sporting clubs and functions (for just about anything) all over Australia, New Zealand, New Guinea, Asia and the USA. He’s done numerous voiceovers for commercials on radio and television and performed on every major television show in Australia in a career that’s gone over the 25-year mark. He was the voice behind “Australia’s Funniest Home Video Show” on Australia’s Nine Network from 1990-1999. He's equally at home doing corporate gigs, clubs or just about anywhere.

His impressions include Dr. Phil, Sean Connery, Michael Caine, Jack Nicholson, Christopher Walken, Robert DeNiro, Joe Pesci, John Cleese, Bill Clinton, Bruce Willis, George W. Bush and Morgan Freeman together with the old Australian favourites like John Howard, Peter Harvey and Richie Benaud and more. He has opened shows for a number of overseas acts including Don McLean (“American Pie”), the late Sammy Davis Jnr., Mary Wilson of “The Supremes”, as well as our own, The Little River Band and Marcia Hines, to name a just a few.

Danny changes the show to suit the audience, so you never know who’ll pop in. Don’t miss Danny McMaster’s extraordinary show. It will be an unforgettable evening of entertainment. 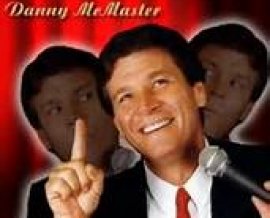