A father and daughter duo, Daryl and Harmony were titled Entertainer of the Year at the 2012 Australian Event Awards.

Having performed in front of crowds at an array of events, Darryl and his young daughter Harmony perform a thrilling combination of duets and solos, Broadway blockbusters and operatic arias, as well as give old classics a fresh twist.

Daryl is known for his portrayal as Jesus in Jesus Christ Superstar both in Australia and New Zealand productions, and has starred in many other stage shows includingLes Miserables, Chess, Looking through a Glass Onion and The Music of Andrew Lloyd Webber.

Harmony was a semi-finalist in Network 10’s revival of ‘Young Talent Time’. She was one of the youngest feature performers at Schools Spectacular in 2011, 2012 and 2013.

As a duo, they deliver ‘goosebump’ moments and are a dazzling entertainment option. 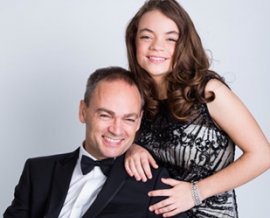