Bizircus has been thrilling audiences for over a decade with their comical character humour and explosive acrobatic stunts. Taking inspiration from Chinese circus, European circus and street Theatre, the troupe has been trained by global clowns and acrobats.

With an ability to adjust their performance, Bizircus tailor shows to suit particular events and themes.

Bizircus - Bizarre and Brilliant! BIZIRCUS are a parody of a circus troupe, thriving on eccentric gags rather than Moscow style perfection.

BIZIRCUS is clever and great fun. Death defying stunts come rapid fire as the performers put themselves through the most amazing contortions. But what shines through the stunts is humour.

The Bizircus performers are a very entertaining bunch of people. When doing their routines, their comic timing never faltered and their presentation was equally flawless. 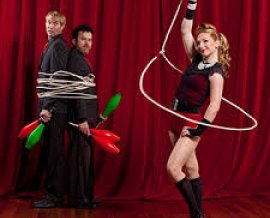