Stephanie Rice has reached the pinnacle of her sport as an elite swimmer, Olympian and World Record Holder.

Stephanie Rice is an inspirational and entertaining speaker who draws on both her personal experiences, and the wisdom and skills she has learnt from coaches and mentors. She is able to pass her knowledge onto the members of any audience and leave them feeling motivated and enthused.

As someone who strives for constant success, Stephanie followed her passion of swimming to become an Olympic athlete at the highest level, competing in multiple national and international competitions.

At the mere age of 17, Stephanie caught Australia’s eye when she won gold in the 200m and 400m Individual Medley at the Melbourne Commonwealth Games. In 2008, she was invited to participate in the Beijing Olympics were she took home three gold medals after demonstrating impeccable perseverance and motivation.

In 2013, Stephanie pushed herself to the limits outside of the pool and joined Channel Nine’s Celebrity Apprentice, where she was not only the youngest person to win but donated a third of her winnings to the chosen charities of her competitors.

After retiring from the sport she loves after suffering from a career-debilitating shoulder injury in 2014, Stephanie has ventured into the business side of the sport and released a children’s swimwear line titled RACERiCE. From this, she encourages every individual to partake in physical activity, hoping a healthier Australia will develop as a result.

Away from the pool, Stephanie has paved her way into the business world creating mentoring & swimming programs, becoming a Global Brand Ambassador and as a recognised Guest Speaker and is available to discuss the following topics:

Whether it be as a guest at your next business lunch or dinner, team building session or major event, Stephanie provides an insighful and indepth analysis on what it takes to be an Olympic champion. 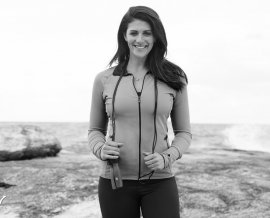