Ray Davies is a professional sailor for Team New Zealand. His near two and a half decades of experience with the team have seen him lend his talents to just about every role there is; he’s been the team coach, tactician, helmsman, designer and strategist. Ray has competed in multiple Volvo Ocean Races and America’s Cups.

Ray joined The New Zealand Team back in 2003 as a part of their weather team for the America’s Cup. He was also a member of New Zealand’s afterguard for both the 2007 and 2013 America’s Cups. In 2021, Ray coached the New Zealand Team in the America’s Cup, and of course he succeeded. Ray’s depth of knowledge and expertise lend him a stellar skillset that allows him to achieve such highs – at the 2017 America’s Cup, Ray worked closely with the design squad to blueprint and create the boat that won. The team extended the threshold of speed and performance in creating a boat with hydrofoils controllable with video game console controllers and powered by bicycles. Ray, along with his talented team, essentially modernised sailing via their remarkable engineering choices.

Ray now offers his talents to the speaking circuit. His insightful anecdotes chronicle the highs and lows of competitive sailing, and highlight his methods of leadership, innovation and what it takes to bounce back from failure toward victory. 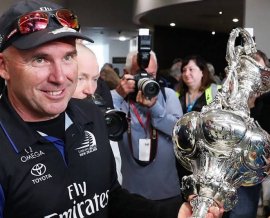