Matthew Hayden is an impeccable cricketer whose skills as a player saw him break multiple records globally.

Matthew’s impressive skills in national cricket included a record of 24 centuries for Queensland, which led to his international success. He was named as the World’s most outstanding batsman in both Test and One-Day cricket and his world record Test 380 confirmed his distinguished stature. He also broke the world record by performing 622 minute innings, as well as participated in 16 Test centuries passing over 4000 runs across 46 tests.

In Early 2001, Hayden’s skills were showcased during a personal tour of India, and saw him net 549 Test runs from a mere six innings. As recognition of his skills, Matthew was awarded the title as Australia’s most prolific Test Match run-scorer, of which he had stripped Bob Simpson within a single year.  From 2001-2002 in the twin home series against both New Zealand and South Africa, Matthew cracked four individual centuries and joined fellow opener Justin Langer, which resulted in a world-record four double century partnership within a single season. In early 2002, he was the winner of the Allan Border Medal and was named Australia’s most outstanding test player of the year.

In 2003, Matthew was titled Wisden Cricketer of the Year and a year later in September was named by the ICC in the World Test Cricket team of the year. During 2004 he scored over 1000 Test runs, for the fourth consecutive year, and was the first batsman in the history of cricket to do so.

As well as being a respected sportsman, Matthew Hayden is an impressive motivational speaker who can motivate and encourage any audience he encounters. 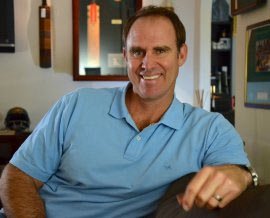