Synonymous with determination, Lleyton is one of Australia's greatest tennis players

Lleyton Hewitt is without a doubt one of Australia’s greatest ever tennis players. His name is synonymous with attributes of determination and commitment, previously winning the 2001 U.S. Open singles title and conquering Wimbledon in 2002, becoming the youngest player in men’s singles history to earn the ATP number one ranking. He also led his country to famous Davis Cup victories in 1999 and 2003.

In 2002, Hewitt was named Australia’s male athlete of the year in 2002 at the Australian Sports Awards. He was also named Sportsman of the Year a year later.

As the curtain closes on his tremendous tennis career, Lleyton is eager to pursue various opportunities off the court, as evidenced most recently in his appointment as Australia’s new Davis Cup Captain.

Aside from tennis, Lleyton regularly appears as a guest commentator for Channel 7 during live coverage of the Australian Open.

Lleyton’s considerable sporting experience, combined with his pleasing manner, informed approach and articulate delivery, make him a natural choice for personal appearances, motivational and after dinner speaking, as well as corporate days and promotions. 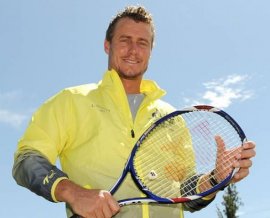