The Most Successful Female Track Cyclist in History and OAM

One of Australia's favourite sports stars, Anna is regarded as the greatest female track cyclist in history. She has participated in four Olympic Games and is a two-time Olympic Champion with 6 Olympic Medals.  Anna is also an eleven-time world champion across four different disciplines and a five-time Commonwealth Games champion. She served as the flag bearer at the Glasgow 2014 Australian Commonwealth Games and the 2016 Rio Olympic Games and was the Australian Olympic Team Captain.

Born in Central Queensland, Anna is the youngest of four children. Having tried different sports such as Karate, Tennis and Swimming, Anna's interest in track cycling was piqued during the 1994 Commonwealth Games. Through the support and encouragement of her parents, Anna and her older sister, Kerrie, would travel 300 km to the nearest cycling club just to practice and compete in the races.

In 2002, Anna participated in the Manchester Commonwealth Games, where she won a bronze medal. After the Games, she was offered an Australian Institute of Sport (AIS) Scholarship by Martin Barras, the AIS Head Coach. The following year, Anna won her first Senior medal and a silver medal in the World Keirin Championship.

In 2004, Anna attended her first year in the AIS under the coaching of Martin Barras. It became one of the most successful years of her career, with a silver medal in the Mexico World Cup and a silver in the World Titles in Melbourne. In addition, she also won the gold medal in the 500m Time Trial in Melbourne and qualified for the Athens Olympic Games, her first Olympic Team representation.

At just 20 years old, Anna became the youngest Australian female track cyclist and the first female to represent Australia on the track to win Olympic Gold at the 2004 Athens Olympics. She also broke the World and Olympic Record and became the first woman in history to break the 34-second barrier for the 500m distance. Anna also received the bronze medal in the Individual Sprint.

For her overwhelming success in Athens, Anna was awarded the Order of Australia Medal.

Anna is a 35-time Australian track champion and has held Olympic, World, Commonwealth and National Records. During the 2016 Rio Olympics, Anna won her sixth Olympic Medal from nine Olympic Starts over her career. Anna became the only Australian athlete from any sport to medal individually at four consecutive Olympic Games with this bronze medal.

Her spirit of sportsmanship, passion, dedication, and hard work are the hallmarks that define her as a champion and a winner.  At the 2008 World Cup Circuit, Anna broke her neck in a horrific crash and was a mere 2mm from needing the support of a respirator to breathe for the rest of her life. However, Anna didn't let this hold her back from riding in the 2008 Beijing Olympics. Ten days after her fall, Anna was back on the bike and went through relentless rehab, showing her incredible passion and dedication to the sport. Just seven months after her injury, Anna won a silver medal in the sprint at the Beijing Olympics. This was Australia's only cycling medal of the Games.

In 2015, Anna became the most successful and decorated female track sprint cyclist in history when she won her 11th career World Title in the Keirin at the World Championships.

In addition to her success on the track, Anna is also driven to be a strong contributor to her community.  After her coach of eight years, Gary West, was diagnosed with Motor Neuron Disease, she joined Cycling Cares, a FIGHT MND Campaign, as an ambassador. She is also an ambassador for the Little Heroes Foundation, a not-for-profit organisation dedicated to supporting children with severe illness and their families.

Anna published her biography, "The Anna Meares Story - The Fighting Spirit Of A Champion", in 2013.

Anna is also an accomplished speaker, having given numerous talks about sportsmanship, success and the power of the mind over body. 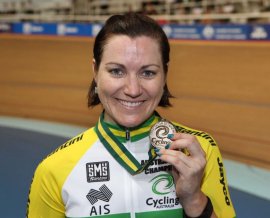