An amazing story of love, courage and inspiration.

Is there anyone more inspiring than Turia Pitt? Turia is one of the most sought after professional speakers in Australia. She provides inspiration to anyone who thought they couldn't achieve their goals.

In September 2011 Turia entered a 100-kilometre ultra-marathon that would change her life forever. At the time, Turia was working at the Argyle Diamond Mine. As a Mining Engineer and Science graduate, she was in her dream role in a successful career.

During this race, Turia became trapped by a grassfire which swept through the Kimberley region. The former model and fitness enthusiast suffered the worst burns doctors had ever seen. Turia had to fight for survival while in a two-month coma but against the odds she survived.

Turia is famously known for her brave efforts in rebuilding her life after suffering burns to over 65% of her body. She spent six months in hospital where she was required to wear a full body compression suit and mask. She underwent over 200 surgeries, had seven fingers amputated and spent two years in recovery.

Turia Pitt has become known as one of Australia's most inspirational and courageous people. Amid emotional scenes, Turia has completed her first Ironman triathlon in 13 hours and 25 minutes of sheer courage.

She finished the 42km run after swimming 3.8km and cycling 180km in Port Macquarie. Her partner Michael Hoskin embraced Turia after she crossed the finish line.

Pitt spent three weeks recovering before she headed to PNG to walk the Kokoda Track as part of her role as an ambassador for Interplast, a charity which provides free reconstructive surgery to people in the Asia-Pacific.

It is inspiring to hear Turia call herself the luckiest girl in the world. Pitt has stayed motivated with her passion for fitness, including swimming in a 20km race, riding her bike from Sydney to Uluru and walking the Great Wall of China. All of this on top of an intense rehabilitation timetable.

Turia currently resides in her hometown of Ulladulla, surrounded by friends and family and the loving support of her partner, Michael Hoskin. Pitt is studying for her Master's degree, and travelling around Australia doing motivational speeches and recently released her memoir ‘Everything to Live For’.

Turia dedicates much of her time to humanitarian causes and had raised over $200,000 for Interplast, which is a charity that provides reconstructive surgery to people in developing countries.

She has helped over 6000 people to overcome barriers and achieve goals in many areas of life through her program 'School of Champions'.

Turia's inspirational story about overcoming adversity will astonish you. Her message to never give up will fill you with motivation and give you a new perspective on life. Turia‘s story is powerful and often receives standing ovations.

To enquire about Turia Pitt as a motivational speaker for your conference or event, please feel free to contact us at any time on 1300 661 904 or info@keynote.net.au or visit our speakers page for further ideas.

Keynote
In her keynote, Turia shares some of her biggest achievements, the strategies that helped her rebuild her life and achieve some of her biggest goals and emphasise that when we get our mindset right, we become unstoppable.
Workshop
Want more self belief, confidence and more resilience? Set and GET an audacious goal. Whether that be becoming the best salesperson in your division or finally running a marathon, Turia shares with you her proven 7 step framework to achieving anything and becoming a high performer.

The feedback on Turia’s keynote has been phenomenal. As someone who has survived against overwhelming odds and has gone on to thrive in the ultimate story of triumph over adversity - Turia is truly inspiring!! Turia was the perfect for our event, very engaging presenter with a powerful message.

Excellent, everyone loved her 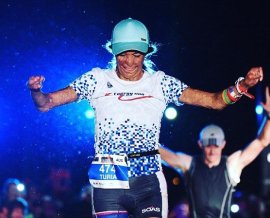