Delivering an inspirational and motivational presentation, Terry Kennedy’s story is one that needs to be heard to be believed. He details his near death experience and emphasises controlling things we are able to rather than focussing on things we cannot control.

Being 35kg overweight, Terry was unhappy and decided he needed to lose that weight after his son, Archie, was born with a rare brain condition. Archie went on to have multiple surgeries and lengthy hospital stays whilst Terry focussed on bettering himself for his young family.

Terry’s father, who was an avid marathon runner, was then was diagnosed with prostate cancer so Terry decided to train and run a marathon in honour of his father whilst he was undergoing treatment.

Five days before the marathon, Terry suffered a brain stem stroke and heart attack at the age of 33. The stroke left him unable to see, walk or talk. It was then that he had to fight for his life. He became involved in a rigorous rehabilitation program to help him regain abilities that he could no longer had  and that other people took for granted.

Eight weeks out of hospital and only four weeks after he learnt to walk again, Terry participated in the Melbourne Marathon, achieving the goal he had originally set himself.

In March 2013 Terry competed in the Melbourne Ironman, only 8 months after he was discharged from hospital.

Having cheated death, Terry decided to use his story to inspire people to never give up and to keep fighting. He encourages people to not take life for granted and to focus on the things you can change if you are unhappy. He increases the motivation levels of audience members and inspires them to finish goals that they have set themselves regardless of the challenge. 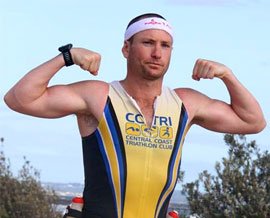