A leading voice against domestic violence

Rosie Batty is a leader in the crusade against domestic violence, especially against women and children, and has turned her personal tragedy into a fight to help others. Her relentless work in this area resulted in Rosie being named the 2015 Australian of the year and the Pride of Australia National Courage Medal recipient.

Rosie’s name has become synonymous with the words courage and resilience. Only hours after her son’s life was tragically taken, Rosie gave voice to many thousands of victims of domestic violence who had until then, remained unheard.

Rosie Batty rose above her personal tragedy and the great loss of her 11-year-old son, Luke, who was the victim of domestic violence at the hands of his father in a very public assault. Rosie’s ability to articulate the train of events that had led to this tragedy has demonstrated the wider implications of her experience.

Now a tireless campaigner, Rosie established The Luke Batty Foundation and launched the Never Alone Campaign, asking all Australians to stand with her and beside all victims of family violence.

Along with the former Victorian Police Chief Ken Lay, Rosie was named as the founding members of the Council of Australian Governments advisory panel on preventing violence against women. Rosie was also The Chair for a Victim Survivors’ Advisory Council for the Victorian Government as a response to the country’s first Royal commission into Family Violence.

Fortune Magazine has named Rosie one of its top 50 world’s greatest leaders and Rosie was voted the most influential person in the Not for Profit sector on Pro Bono Australia’s Impact 25 list and has been inducted into the Victorian Honour Roll of Women.

Recently she received an Honorary Doctorate from the University of the Sunshine Coast for her contribution to raising National Awareness concerning Family Violence. In 2019, Rosie was appointed as an officer in the Order of Australia, recognised for her distinguished services to the community.

She is proud to be a Patron for the Australian Childhood Foundation and Doncare Community Services.

Her public speaking appearances are a remarkable story of resilience, courage, inspiration and making a difference.

Rosie’s incredible strength and selfless efforts are an inspiration to many people.

Rosie Batty is exclusively managed by Keynote Entertainment. Call 1300 661 904 to enquire about Rosie as a speaker at your next event.

Please note that whilst Keynote Entertainment manages Rosie Batty’s Speaking Engagements we are unable to take requests for support and assistance. Should you be in need of support please call 1800RESPECT or if you are in immediate danger please call 000.

Rosie exceeded our expectations. She was a wonderful speaker who managed to convey her message in a quiet and dignified manner. She really gave insight into and understanding of domestic violence and raised the awareness of everyone present. It was an emotional rollercoaster for us all as we shared her grief but also her hope for reform. Our audience was totally engaged and focussed the whole time. She is truly an amazing and incredibly brave woman and we were honoured to have her speak. We could not recommend her highly enough! 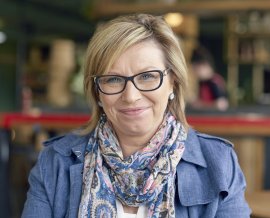