After surviving a devastating accident whilst playing rugby union, Perry Cross founded and became president of the Perry Cross Spinal Research Foundation.  His core goal is to inspire others to achieve. Becoming a C2 quadriplegic in 1994, just one year prior to Christopher Reeve sustaining the same injury, has allowed him to become one of the world’s most lauded motivational speakers and one of very few who rely on a life support machine to function.  He has been heralded as an exception role model for overcoming the odds to succeed and overcome what appeared to be insurmountable odds.

Perry completed a Communications and Business degree at Bond University in 2000 and utilised the skills he learned to inspire others to success against the odds.

Travelling to the US as an advisor to the UN, Perry was given the opportunity to meet with Christopher Reeve to discuss raising an awareness and working towards finding a cure. After this meeting, Perry was able to arrange a meeting with the Prime Minister and Governor General, as an advocate for Reeve, to lobby the legislation of stem cell research.

In 2005, Perry released his autobiography, “Still Standing”.  His life motto is, everything is possible!

Established in 2010, the Perry Cross Spinal Research Foundation has one clear vision - to find a cure for paralysis.  He is confident that it will be found.  It is just a matter of when. 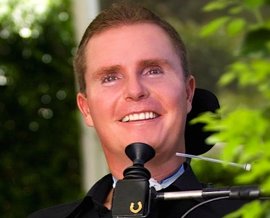