People recovery and emergency situation expert, Paul is an Australian Bravery Medal Winner among many other motivational honours!

Paul Featherstone is a most exceptional and inspirational person who has spent more than 40 years assisting people in life threatening situations in Australia and internationally, frequently putting himself at risk so as to help save the lives of others.

In 1972 Paul joined the New South Wales Ambulance Service and in 1976 established the Ambulance Service’s highly commended Paramedic system. Then in 1986 Paul established the (S.C.A.T) Special Casualty Access Team, and until his retirement in 2013 Paul was a team leader in developing patient access methods and systems for high levels of care under hostile environments and conditions.

The extensive experience Paul has gained has seen him become one of Australia and the World’s leaders in crisis situations where lives are at stake. Paul is highly skilled and able to very quickly access situations, provide treatment, and where required assist in the recovery and transport of injured people either by foot, road, air or sea depending on location and injuries sustained.

Establishing distinctive and unique training methods in high-risk areas based on his “real world” experience and knowledge, along with solid emphasis and importance on motivational techniques, team-work and strong decision making, as a SCAT instructor Paul was able to pass on his vast knowledge and skills in the training of new team members.

Along with being an Australia Day Ambassador for the last seven years, Paul has been the recipient of many prestigious awards such as the Ambulance Service’s highest award for bravery twice along with an Australian Bravery Medal, the Humane Society’s Gold, Silver and Bronze, and the Ambulance Service Medal as part of the 2007 Queen’s Birthday Honour List to name just a few.

As a leader in his field Paul has played an important role in assisting many victims from major disasters such as the Granville Rail Crash in 1977, the Thredbo Avalanche in 1997, the Bali Bomb emergency in 2002 and in 2006 the Mine Rescue in Beaconsfield, Tasmania.

Paul Featherstone is a knowledgeable and skilled conference and motivational speaker and he delivers enlightening, moving and inspiring presentations on topics such as managing crisis, work/life balance, managing stress, leadership and team-work to name a few. Paul speaks with great passion drawing from his wide and varied experiences as an outstanding ambulance paramedic and rescue/emergency professional.

Paul is available for corporate events and conferences and he is also a wonderful after dinner speaker with many inspirational and touching stories that blow his audiences away. 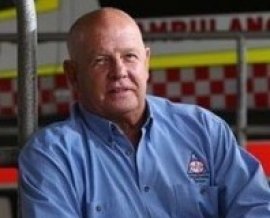