Mark Inglis is a motivational individual who faced his own fears and overcome the unthinkable. He has spoken at the 2009 Global Creative Leadership Summit in New York and is also a regular presenter at TEDx events globally. He uses his presentations to share both his experiences and his philosophies to better everyone’s lives.

Mark was only 23 when climbed New Zealand’s highest peak, before he was trapped in an ice cave by a blizzard for 14 days. He was suffering from frostbite and starvation and was close to death.

The next thing he knew, he awoke in hospital and found he had lost both of his legs below the knee to frostbite.

Rather than see his loss of limbs as debilitating, Mark decided to become the first double amputee to climb Mount Everest. To this day, his title remains.

Since then, he graduated with a first class honour degree in human biochemistry and became a research scientist. Mark’s career then progressed into winemaking at Montana Wines in New Zealand. He became a senior winemaker and spent over ten years developing globally acclaimed wines such as Lindauer, Deutz and Sauvignon Blanc to name a few.

Using the legs he developed in partnership with Wayne, Inglis became a competitor in disabled skiing even attending the 2000 Sydney Games where he won a silver medal.

Mark has been a founding trustee of Limbs4All Charitable Trust, been a patron of multiple charities and has authored five books. He was also recently awarded a doctorate in Natural Resources.

As a speaker, Mark Inglis has presented to hundreds of thousands of people both nationally and internationally and inspires and motivates his audiences to embrace change and overcome challenges. His presentations feature his unwavering determination in the face of adversity and how every individual requires that skills to perform better in their own lives. 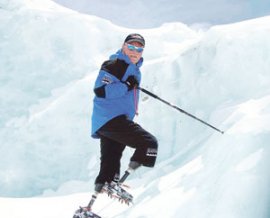