Louise Sauvage is well known and greatly respected for her amazing athleticism and remarkable achievements as a wheelchair track and road athlete. Louise caught the attention of media around the world through her sporting achievements and in doing so became a house-hold name, a much loved Australian sporting identity and a sought-after motivational speaker.

At just 18 Louise decided that her plan was to become a professional sportsperson and she would earn her living from her sport – 15 years later Louise retired from her sport as one of the country’s most successful and popular athletes. During her sporting career Louise helped to change the perception and awareness of elite sportspeople with a disability and the sports they chose to compete in. Louise has continued to help create and encourage education, recognition and acceptance of disability in general in the eyes and minds of both the media and the public.
Louise conquered and dominated her sport of wheelchair track and road racing during her career by competing in 4 Paralympic Games and coming home with 9 Gold Paralympic Medals and 4 Silver Paralympic Medals.

Also competing for Australian at 3 Olympic Games in the 800m women’s wheelchair demonstration race Louise won 2 Gold Medals and 1 Bronze Medal. The clear highlight was winning Gold in Sydney, her hometown at the 2000 Olympics in front of 110,000 screaming spectators.

A Commonwealth Games Silver medalist and 5 time Gold medalist at the IAAF World Athletic Championships, Louise succeeded in recording World records in each distance on the track from 100m to 5000m and achieved first place wins in many of the worlds’ most prestigious and significant road races including 4 Boston Marathon victories.

A most successful and hard-working individual, since retiring from her sport Louise has also completed a Post Graduate in Applied Science (Coaching) and she now works for the NSW Institute of Sport with the National Wheelchair Track and Road Program as an Assistant National Coach working with Australia’s future champions. Those athletes are now greatly benefiting from Louise’s expertise, guidance and instruction.

Louise is a wonderful speaker, she has many great stories to tell about overcoming adversity, chasing your dreams and the commitment required to do so. She is available for conferences, sporting dinners, and school presentations; a most motivating and inspiring Australian. 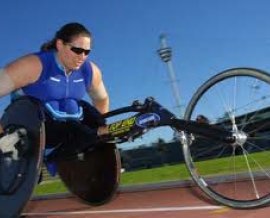