An avid swimmer since she was four, Libby Trickett was always a prominent athlete. Her skills saw her take on some of the world’s best swimmers and come out on top, as well as competing in multiple major tournaments.  She is married to swimmer Luke Trickett and is a proud mother.

In 2003, Libby made her debut as a professional swimmer at the tenth Federation Internationale de Natation World Aquatics Championship in Barcelona. She was coached by Stephan Widmer and her impressive skills saw her take home bronze medals in both the 50m freestyle and the 4 x 100m freestyle relay.

Trickett also participated at the Beijing Olympics in 2008, where she won two gold medals in the 100m butterfly and the 4 x 100m medley relay as well as winning a silver in the 100m freestyle.

Libby Trickett is known as Australia’s Golden Girl and her impressive skills as a swimmer emphasise why. She speaks passionately about her sport and can inspire and motivate any audience. 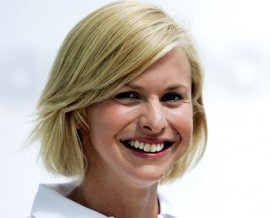