Sharing an inspirational story that opens the eyes of audiences

Kathy and Ralph Kelly are the parents of 18-year-old Thomas, whose life was cut short after an unprovoked and fatal attack in Kings Cross in July 2012.

Dazed and raw from having to turn off their son's life support, Kathy and Ralph Kelly were the epitome of courage. Told by the Office of the Department of Public Prosecutions (DPP) that their family would be 'lucky' to see their son's killer receive a sentence of two years, the Kelly family never laid down and accepted a system that was at best antiquated and at worst lacking in a duty of care.

They then formed the Thomas Kelly Youth Foundation, which provided a platform for them to lobby the NSW State Premier and Attorney General, with the aim of amending the sentencing laws. The Foundation also began advocating for 1:30 am lockouts and 3 am 'last drinks' in venues across Sydney. The introduction of these new laws in February 2014 resulted in zero serious brain injury admissions as a result of alcohol intoxication to Sydney's largest hospital, St. Vincent's, for the whole of 2014.

As speakers, Kathy and Ralph are trusted and credible. They deliver positive and powerful messages through their personal story of hope and faith, and there is no denying that their story is eye opening. They share their story to give us an insight into why resilience, in our lives and the lives of those around us, and the ability to overcome adversity are vital to making our rapidly changing world a better place to be. 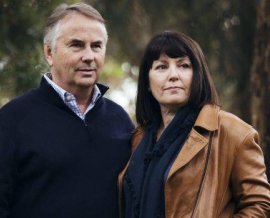