John Coutis is one of Australia’s most inspirational figures. He’s lived a miraculous life, defying an early diagnosis and becoming a world-leading motivational speaker, championing a wonderful message to audiences around the world about the truths of ability.

JC lives a marvellous life. Without the lower part of his body, he travels on a custom-made skateboard – talk about travelling in style! JC is widely known for his gregariousness and stellar sense of humour, and his ability to use these assets to share a series of his life lessons and stories about how he came to where he is today.

Australian Rugby Union Team, the Wallabies called on JC to boost their attitudes for the final match of the series against the British Irish Lions, where they then went on to win the deciding Test match. Rod McQueen, John Eales & George Gregan publicly acknowledged JC for getting the Wallabies over the line.

JC’s sessions focus on resilience, courage, positivity, determination and respect. His inspirational messages have reached over 6 million people across the world – JC has spoken in front of huge names including: Bill Clinton, Richard Branson, Tony Blair and Nelson Mandela. JC regularly speaks to stadium-sized audiences and carried the Queen’s Baton on the day of the Opening Ceremony in the Commonwealth Games in 2018.

In 2020, John was recognised with an Order of Australia Medal for his services to the Australian community.

JC is offering his talents to you. His conviction and wit are marvelled upon by audiences as he shares his considerate thoughts on a range of topics. He is available for bookings now.

“This is a gentleman whose own adversity and triumph over it, are personal inspirations to everybody. On top of this, he speaks superbly, he has a clear mind, he has a wonderful sense of humour." 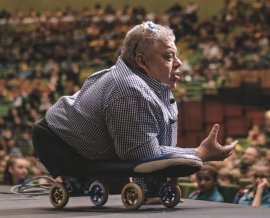