Jenn Morris is a duel Olympic gold medallist whose captaincy allowed her team to be victorious in their ambitions. She is a proud leader and speaks passionately to a range of audiences from any industry background.

Jenn represented Australia in the sport of hockey for almost a decade, during which she shared captaincy and supported a team that remained undefeated in major tournaments. She is one of the original players from the Ric Charlesworth era and is described in his book as ‘the best player in the world in her position and also the most resilient’.

After spending more than two and a half years on the injury list after complications from a knee-reconstruction surgery and the looming Sydney 2000 Olympics, Jenn was determined to make it to the Olympics and play her 150th and final game of hockey. She was the one who scored the final goal that led to Australia’s victory, making it a memorable end to her career.

Since retiring from the sport, Morris has since worked with Deloitte as the recently retired Director of the Consulting Division, as well as been the past Chairwoman of Heathway in WA and a board member of the Western Australian Institute of Sport and Fremantle Football Club. She has also undertaken several Non-Executive Director roles but has most recently been appointed as a Non-Executive Director to the board of Top 20 ASX listed Fortescue Metals Group.

Jenn’s presentations are fuelled by parallels between sport and business with the aim of demonstrating common values and how to achieve success. She has spoken to a multitude of large organisations including ANZ bank, Commonwealth Bank, AMP, McDonalds Australia, Automotive Holdings Group – Holden Australia, Financial Planners Association of WA, AON Health Risk Insurance Services, National Nine Network, BankWest, General DataCom as well as many more.

With a focus on teamwork, training and overcoming adversity, Jenn Morris uses her past to communicate effectively with audiences and remind them how to achieve success. She emphasises the effects of leadership and honesty and what the core values of a champion should be. 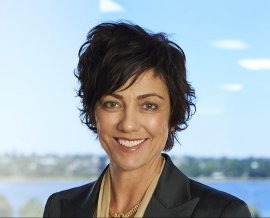