Learn how to reach objectives whilst dealing with uncertainty

Jamie Fitzgerald strives for success in everything he does and is constantly searching for new ways to test his own boundaries. In 2007, Jamie became the first ever Kiwi to reach the South Pole unsupported on foot with fellow adventurer Kevin Biggar. This 52-day expedition created media attention worldwide as they implemented a 'business-like' approach to reaching success.

Jamie's other sporting achievements include the world record for rowing across the Atlantic Ocean (5000km) in a tiny row-boat, wins against both Cambridge and Oxford rowing crews during his management and marketing degrees, elite representation with New Zealand Rowing and double New Zealand representation in rowing and surf lifesaving.

Jamie’s speaking and facilitation experience is enormous, with feedback to prove the quality of Jamie’s delivery. Hundreds of thousands of people around the world have benefited from his inspirational, insightful and compelling messages. Jamie’s knack in turning his messages into meaningful dialogue between audience members is a tribute to his ability to ‘shape conversations’ too. Skills such as dealing with uncertainty, team effectiveness during the economic downfall, goal setting, communication techniques, dispute resolution and reaching objectives are among some of his strengths.

His ability to relate to any audience, and develop client specific presentations and workshops lead to very satisfied and inspired organisations! In short, Jamie’s inspirational messages are changing peoples’ lives.

Jamie is a dynamic speaker and would be sure to wow your audience. 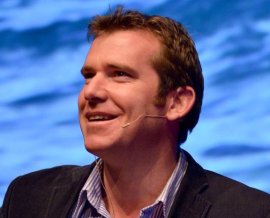