Dr. Glenn Singleman and Heather Swan are an Australian husband and wife team. Since 2001 they have been wowing audiences in Australia and internationally with their inspirational keynote presentations. Glenn and Heather use stories from their incredible adventure careers to introduce key themes such as the Science of Peak Performance, Understanding the Mind, Controlling Irrational Fear and Committing to Excellence.

The achievements they can draw on are impressive. Glenn and Heather have set multiple World and Australian records in extreme sport, including one for the highest BASEjump and for the highest Wingsuit BASEjump, both set from a 6672 metre Himalayan mountain.Glenn is well known to Australian and International audiences both as a motivational speaker and as a documentary film-maker. He is also a practicing medical doctor. He has travelled to the remotest corners of the planet and made many successful films for National Geographic International including BASEClimb which continues to win awards as one of the best adventure documentaries of all time, and four projects with Hollywood Director James Cameron (Terminator, Titanic, Avatar), including Cameron’s most personal project – his 2012 expedition to the Marianas Trench.

Apart form being a sort after professional speaker, Heather Swan is the only woman in the world to successfully combine high altitude mountaineering and BASEjumping, let alone wingsuit BASEjumping. She is also a best selling author and professional photographer. She was formerly a senior corporate executive in PR, Marketing and Management.
Glenn and Heather are Australia’s best known wingsuit pilots with an impeccable safety record on over 1000 wingsuit flights each. They have featured twice on Australian Story, twice on 60 Minutes and many other current affairs and news segments. They have also featured in a number of international documentaries. They are recipients of many prestigious awards including the ‘Spirit of Adventure Award’ for excellence by the Australian Geographic Society.
In 2012 Glenn was a key member of the Deep Sea Challenge Expedition which culminated in the deepest solo submersible dive in history by team leader, James Cameron. In 2014 he was medical director on an Antarctic Expedition to the Bay of Whales.

Glenn and Heather are currently working on a Wingsuit flight across the Grand Canyon, to take place on April 8th 2015. The flight will feature on 60 Minutes and in Australian Geographic.

As a medical doctor and professional adventurer, Dr. Glenn SIngleman has lead ground breaking expeditions to the most remote and extreme locations on the planet researching and testing his theories on personal peak performance and scientific risk management, two things he believes are intrinsically linked and at the foundation of health, happiness and success.

Beginning in 2000 he put his theories to the ultimate test when his wife Heather, a corporate executive with no background in athleticism or adventure, joined his team to climb and wingsuit the highest cliff in the world.

Glenn and Heather’s joint presentation is not only the inspirational story of Heather’s unbelievable journey from complete novice to world record holder, it’s a valuable insight into what’s possible when we understand and overcome irrational fear, successfully manage risk and diligently apply Dr. Singleman’s principals of peak performance. 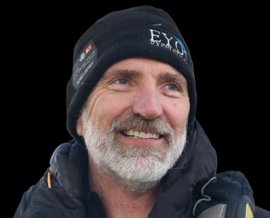