Australian veteran of the war in Afghanistan with an inspiring story

A soldier, Paralympian and inspiration to many, Damien Thomlinson is a man whose determination and commitment saw him face terror head-on and come out triumphantly. His personal story is engaging and insightful and has been used to inspire audiences across Australia, including large and well-respected organisations.

At the age of 24, inspired by the military history of his Grandfather, Thomlinson joined the Australian Defence Force and achieved his goal of becoming a Commando. The elite group takes on the physically demanding, mentally challenging and dangerous roles within the armed forces and are often behind enemy lines.

In April 2009, whilst serving in Afghanistan with the 2nd Commando Regiment, Damien’s unit was on night patrol in South Afghanistan. They drove over an improvised Taliban bomb which caused him to suffer irreparable injuries to the extent that his medical team were certain his demise was imminent. Consequently, both of Damien’s legs needed to be amputated but he survived the deadly explosion.

Instead of seeing the loss of two limbs as a debilitating event, Damien treated the loss as a challenge that needed to be overcome. He participated in frequent rehabilitation and set out to re-claim his life, beginning with relearning how to walk with the use of state-of-the-art prosthetic limbs.

As part of his rehabilitation challenges, Damien also took up snowboarding as an outlet for his skills as a surfer before his injuries. In 2011, alongside four other Australian Defence Force members, he competed in the US Marine Corps Paralympic Trials. In 2012, he declared that his next challenge would be to represent Australia as a snowboarder in the 2014 Winter Paralympics in Russia.

His determination to continue life as he normally would saw Thomlinson take part in challenges that any able-bodied person would have second thoughts about.  He participated in the TARGA Tasmania classic car rally to raise funds and has trekked along the Kokoda Track – a 93-kilometre trek through the jungles of Papua New Guinea. Walking the trek was an emotional period for Damien as he was doing it to honour his friend Private Scott Palmer, who tragically died in a helicopter crash a mere week before he was meant to return home. Private Scott Palmer’s father walked the trek alongside Thomlinson in remembrance of his son. Damien continues his fundraising initiatives, raising both money and awareness to organisations that assist injured soldiers and their families, such as Legacy and the Commando Welfare Trust.

Today, Damien Thomlinson utilises his thirst for adventure, previous experiences and impeccable ambition to motivate audiences across the globe. He speaks passionately about overcoming challenges and how motivation and determination can assist to achieve any goal.

2018 saw Damien take on Survivor Champions.  As a contestant on the show he said he entered to competition because he "wanted to show veterans and people that are adaptive and that anything is possible." And Damien did just that! A true hero.

I've been to a few of these events and no speaker has inspired or made a bigger impact than Damien. This was also the feedback from my other colleagues. When someone can speak on a subject from personal experience and the impact on their lives, it carries more weight and impact for people like us rather than speakers who are skilled at public speaking but leave no lasting impact. I hope to see more speakers of Damien’s calibre.

We were privileged to have Damien join the Australian Kangaroos Team during preparations for our Test Match against New Zealand. His inspiring story resonated within the team and definitely contributed to the success of our week. We look forward to having him back in the future

Damien was absolutely fabulous and by far the best presenter we have had at our event. The amount of positive feedback we have received has been amazing, I have never seen our audience engage with a presenter the way they did with Damien. Despite the challenges he has faced he truly is an inspiration and a pleasure to work with, and I would highly recommend him.” 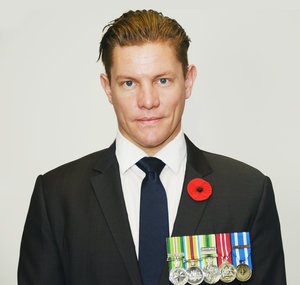