Corporal Mark Donaldson VC was a member of Australia’s SAS. He was awarded the Australian Victoria Cross for his heroism under fire in Afghanistan.

Mark Donaldson presents a living and breathing display of courage and leadership. He’s an inspirational man who has on multiple occasions shown great valour in the face of adversity. He seeks to share his story and to help others find courage to overcome challenges in their own lives.

On September 2nd 2008, Mark was with the Australian SAS in Eastern Afghanistan. He made a split-second decision – it changed his life. Mark’s extraordinary display of courage that day saw him awarded the Australian Victoria Cross for Gallantry.

Mark had a difficult childhood. As a teenager, he lost both his mother and father; his father, a Vietnam War Veteran, whose passing was closely followed by Mark’s Mother’s disappearance. He was at a crossroad in his life; a path towards self-destruction was laid out before him, but Mark went the other way. He chose to join the Army.

Mark was a natural. He excelled in training and in all facets of military life. He set goals for himself and planned a program that would allow him to see through the arduous tests that must be passed in order to become a member of the SAS. He succeeded.

Mark toured East Timor, Iraq and Afghanistan. Mark knows that his being with us today is a reminder of good fortune – a bullet remains lodged in his leg today, which he says keeps him focused.

Mark is married with two kids. He continues to serve in the SAS. He has written a best-selling book “The Cross Road – a story of life, death and the SAS,” and he is the patron of Soldier On, a philanthropic group focused on assisting soldiers with PTSD and their transition back into normal life. 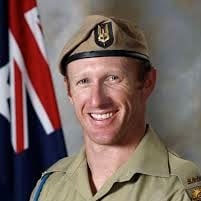