The eldest of five Campbell children, Cate was born in Malawi and was taught to swim in Lake Malawi by her mother Jenny – a former synchronised swimmer.

When the family moved to Australia in 2001, nine-year-old Cate and her sister Bronte joined the local Indooroopilly Swimming Club in Brisbane and fell in love with competitive swimming.

Cate’s dominance in the pool began at a young age, rising through the ranks to win two gold medals as a 13-year-old at the Australian Age Championships to put herself squarely on the national team radar as one to watch. By the age of 16, she had broken the Australian & Commonwealth 50m Freestyle records and earned selection at the 2008 Beijing Olympics, where she displayed remarkable maturity and poise on the biggest stage in world sport to win Bronze medals in the 50m Freestyle and 4 x 100m Freestyle events.

The 2016 Rio Olympics saw Cate win her second Olympic Gold in the 4 x 100m Freestyle as the Australians broke their own world record in the process. A Silver in the 4 x 100m Medley also entered the trophy cabinet, yet she returned home disappointed by her performances in the individual events and elected to largely take a year off from swimming, yet still managed to again break the 100m Freestyle Short[1]Course World Record. 2018 saw Cate return to full competition for a home Commonwealth Games on the Gold Coast and she thrived in the local surroundings to win three more Commonwealth Gold medals in the 50m Freestyle, 50m Butterfly (an event she had virtually no experience in) and in the 4x100m Freestyle. 2019 proved to be another stellar year, winning two Gold, two Silver and a Bronze medal at the World Championships.

At the inaugural International Swimming League (ISL) for the London Roar, Cate helped the Roar top their group, then capped off the year by winning the 2019 FINA Swimming World Cup, taking home the honours in the women’s ranking. In 2021 Cate qualified to swim at her fourth Olympics. She joined an elite group of three Australian swimmers to compete at four Olympics, a testament to her endurance and dedication to the sport.

A glistening career and list of achievements were tied together with the announcement that Cate would be the Australian Flag Bearer at the Tokyo 2020 Olympic Games. At the games, Cate came away with a bronze medal in the 100m freestyle. She was part of two memorable relay teams, the first was the all-conquering 4x100m freestyle team who broke their own record. The second was the 4x100m medley relay, where Cate anchored the Australian’s and swam one of her best relays ever, to come home over the top of the USA. After four Olympic Games, Cate sits amongst the greatest swimmer to represent Australia with 8 medals to her name. Only three Australian Olympians have won more medals, and only one other swimmer has represented Australia as many times as she has at the Olympic Games.

Cate is currently studying a Bachelor of Communications. After her swimming career, she intends to combine her love for sport and media, already writing regular opinion columns for the Brisbane Courier-Mail. Cate enjoys travelling and experiencing foreign cultures. She is an outdoors person and lover of nature, constantly going scuba diving, hiking and on adventures in every spare moment.

After being diagnosed with stage one Melanoma in a mole she had removed, Cate is very passionate about sun safety and regular check-ups. She is an ambassador of Melanoma Institute Australia, playing a major role in their ‘Game on Mole public awareness campaign. In 2021, Cate joined forces with Bronte to write ‘Sister Secrets: Life Lessons from the Pool to the Podium’ 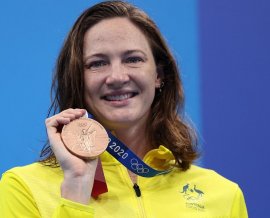