Carly Findlay is a blogger, writer, speaker and appearance activist. She challenges people’s thinking about what it’s like to have a visibly different appearance.

She’s written for many publications including The Guardian, The Age and Sydney Morning Herald, Daily Life, The ABC, Mamamia, Frankie magazine and BlogHer. She’s used her blog to write about her skin condition, Ichthyosis, as well as promoted causes such as Love Your Sister and Donate Life.

Carly was named as one of Australia’s most influential women in the Australian Financial Review and Westpac 100 Women of Influence Awards for 2014. Carly received the 2010 and 2013 Yooralla Media Awards for Best Online Commentary for her body of disability focused writing. She also won the best personal blog category for Kidspot Voices of 2013, and the 2013 BUPA Health Activist award for Positive Life Change. She’s also been a finalist in the Best Australian Blogs competition in 2011, 2012 and 2014.

Carly is an accomplished speaker – she’s spoken at the University of Western England’s Appearance Matters conference, the Melbourne Writer’s Festival, Emeeging Writers Featival, Problogger, University of Melbourne, Royal Melbourne hospital, Progress2017, the Australian Education Union of Victoria and Cancer Council of Victoria (to name a few). She’s a regular on ABC radio, and has spoken on podcasts including the Oaher Günsberg Podcast, Fully Sick, The Accessible Stall, Neighbuzz, and Just a Spoonful.

Carly has performed in Quippings  at Hares and Hyenas, the Spiegeltent and Malthouse Theatre in the Melbourne Fringe Festival and Emerging Writers Featival.

Carly appeared on You Cant Ask That and Cyber Hate with Tara Moss on ABC TV in 2017.

In 2013 Carly was discriminated against by a taxi driver because of her skin. She wrote about this on her blog, took the case to the Human Rights Commission and made a complaint to the taxi company and the Victorian Taxi commission. One of the outcomes she wanted following her complaints was for improved disability training for taxi drivers. A video was made for the taxi company with Carly’s input, and disability-related complaints have since reduced. She is proud to have influenced the taxi industry and assisted passengers in this way. The video has since been disseminated to all Victorian taxi companies via the Victorian Taxi Commission too. 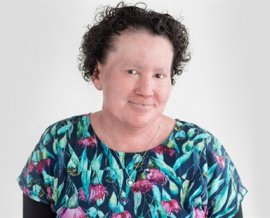