One of Australia’s greatest cricketers with an incredible story

Brad Hogg is an honest and entertaining individual whose love and passion for cricket saw him become one of the greats. He motivates every audience member in the room and his personality is extremely engaging.

In 1994, Brad made his debut in first-class cricket and domestic limited overs for Western Australia. He is known for being a left-arm wrist spinner (Chinaman) bowler and a capable lower order left-hand batsman as well as an excellent fielder. Two years later, Hogg represented Australia and toured both Sri Lanka and India, before spending seven years in the wilderness as a break.  Brad made his mark on the cricket scene when he replaced Shane Warne on the Australian One Day team in 2003.

As well as being the seventh most successful One Day bowler for Australia, Brad is the second most successful spin bowler in both 2003 and 2007. During the 2007 World Cup, Brad beat Andrew Flintoff of England with two consecutive ‘Wrong Uns’, with his second delivering stumping out the competition. He is one of 15 Australian cricketers to have won the cup more than once.

Brad has played in 123 One Day Internationals and 7 test matches for Australia. He has represented Western Australia in cricket for 14 years, during which he spent a season with Warwickshire during which they won the championship.

He has a contagious personality as is described as a ‘pest’ due to his inability to stay still for longer than 30 seconds. He enjoys every minute of his cricketing career and is often seen on the field with a large grin.

In 2012, his impeccable performances caught the eyes of Australia cricket officials and he was selected to play for Australia in the Twenty 20 squad. Two years later, at the age of 40, Brad was asked to join Perth’s new Big Bash team the Perth Scorchers. His triumphant return to the sport allowed the Scorchers to win the Big Bash League for three sequential years, culminating with them earning a place in the Champions League Twenty 20 Tournament in India.

Despite constant breaks in between seasons, Brad Hogg is one of Australia’s greatest cricketers. He uses anecdotes and humour to relate to any audience and his passion comes through in all his presentations. He can assist in improving productivity by increasing the levels of determination and motivation within audiences. 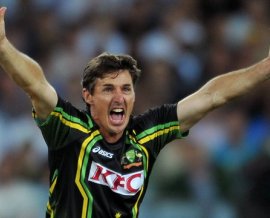