Sandra is a senior journalist and anchor of TEN News First in Sydney Sydney and recently appointed Managing News Editor of ten daily.

She has been part of the TEN News team since 1990 and celebrated her 25th anniversary at the Network in 2015.

As one of the most recognisable and respected faces on Australian television, Sandra has also hosted major Network news events including the Federal Budget, the Royal Wedding coverage from London and Oprah Winfrey’s Big ‘O’ event at the Botanical Gardens. She also co-hosted TEN’s interactive, real-life crime series Wanted.

Sandra’s career includes 18 years as the highly popular Presenter and Senior Editor of TEN Late News with Sports Tonight. In that role, Sandra was the first Australian journalist to break the news of the September 11, 2001, terrorist attacks in the United States. She has subsequently covered anniversary commemorations of both the Bali bombings and the September 11 attacks.

Sandra’s documentary credits include travelling to Timor in 2010 to produce Independent Future, a report on how the then new nation was coping post-liberation.

In 2009, her documentary Sandakan – Sheer Bloody Murder revealed the tragic story of hardship and horror faced by Australian prisoners of war in Borneo on the infamous death marches of World War II. It premiered on Network Ten over the Anzac Day weekend that year.

Sandra was one of the first journalists in the country to fully understand the impact and embrace the digital media revolution. Seeing early on the power of the platform and its ability to immediately deliver up-to-date and breaking news, Sandra has established herself as one of the nation’s news leaders online, building a mass following on social media platforms.

Sandra’s engaging warmth, style and versatility have enabled her to cover numerous events such as Commonwealth and Olympic Games, as well as becoming the first woman to co-host the iconic Melbourne Cup/Spring Carnival, a role she filled for seven years.

Sandra is a passionate sports fan and sits on the Board of Hockey Australia, as well as being one of the first women members of the prestigious Carbine Club of New South Wales, which supports children in sport.

Sandra is an Ambassador for National Adoption Awareness and, as well as being committed to several charity organisations, including her position as Co-Patron of Spinal Cure and Ambassador for the NSW Crime Stoppers.  She is also a National Ambassador for Do Something, which encourages social change.

Sandra’s passion for news has fortified her position as one of the finest newsreaders in the country, delivering TEN News bulletins with integrity and credibility. 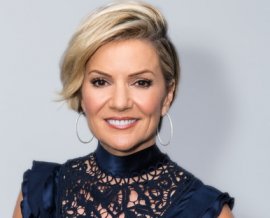