With a bubbly personality, Richard is one of the nation's favourite imports

Over the past decade, Richard Reid has become one of Australia’s favourite imports. Even with his distinctive American accent, Richard paved a media career for himself, working his way into the hearts of Australians young and old alike. His popularity culminated in earning the title of 'King of the Jungle' on Network 10’s 2019 season of 'I’m a Celebrity Get Me Out of Here!'

Richard burst into our lounge-rooms in 2006 as the Hollywood Gossip Guru on Channel Nine's Today. Keeping the hosts in stitches, he parlayed a one-off guest appearance into a five-day a week gig for the next 8 years. Channel Nine quickly capitalized on his popularity, casting him in the feel-good renovation series Domestic Blitz opposite Scott Cam and Shelly Craft, which rewarded everyday Australians with a quickie holiday and a spiffy home remodel. Richard returned to Nine in 2014, bringing his banter and business savvy to the boardroom in Celebrity Apprentice.

As a contributing member on Studio 10, Richard broadened his appeal, giving his unique take on current events, government policies, cooking and fashion.

Richard is also a regular contributor to Kyle & Jackie O in Sydney along with FM stations in Perth, Melbourne, Adelaide and Brisbane. Internationally, he could be heard on Kuala Lumpar’s #1 Hitz FM and South Africa’s Jacaranda FM. Magazine readers couldn’t get enough of Richard’s weekly column 'What the Frock!' in Women’s Day, cheekily dissecting the over-the-top wardrobes of celebrities all around the globe.

In 2019 Richard became an Ambassador for Beyond Blue, raising awareness for depression and anxiety and for Delta Airlines, promoting tourism between Australia and the USA. 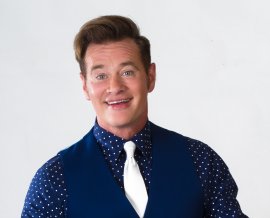