Nartarsha Belling read her first international news bulleting at the age of 21 and now has more than decade of reporting experience. Her passion for news, her warmth and sincerity have seen Natarsha develop into one of the country’s most highly regarded newsreaders.

Both national news services focus heavily on breaking stories, where Natarsha uses her invaluable skills as an award winning journalist to not only present news but also shape it. She interviews the news makers and breakers, giving the audience unprecedented access to the latest information and analysis of the day’s major issues.

Natarsha’s admirable talent and diversity have seen the National News Presenter step up her appearances on the Network’s key programs, including “The 7pm Project” and “The Circle”. This year, the mother of two also fulfilled a life-long dream to host a wildlife documentary. Aired in prime-time “Delivering the Pandas” detailed the incredible story of Wang Wang and Funi and the extraordinary journey to transport the endangered Pandas from the remote mountains of South West China to Adelaide Zoo.

Natarsha started her prestigious journalism career as an on the road reporter in regional NSW after completing a Bachelor of Arts -Communication at Charles Sturt University in Bathurst. After just twelve months with Prime Television in Orange, the ABC poached Natarsha to take up a key journalism position with its newsroom in Darwin. During this time, the budding young journalist was at the forefront of reporting on the controversial euthanasia legislation and also discovered her love of news reading. At just 21, Natarsha presented her first news bulletin for ABC Darwin and the ABC international news service, Australia Television which was beamed to millions of viewers throughout Australia and Asia.

In 1998, Network Ten poached Natarsha to join its National Newsroom in Sydney. During this time, Natarsha has cemented her position as a key National journalist and presenter, reading across all the Network’s major news bulletins including the Morning, 5pm, Late and Weekend Services.

Like her passion for journalism, Natarsha is also passionate about supporting those in need. As a mother of two young sons, Natarsha has stepped up her commitment to a number of prestigious charities.

She is on the Women’s Advisory Board for the National Breast and Ovarian Cancer Centre, is an Ambassador for the Royal Hospital for Women, Alzheimer’s Australia, The Cancer Council and the Bonnie Babes Foundation.

Natarsha is also a sought after MC, with a wealth of experience. She has hosted a number of prestigious events from International Women’s Day at Parliament House in Canberra to Australia Day Celebrations with a crowd of around 200,000 in Sydney’s Darling Harbour. 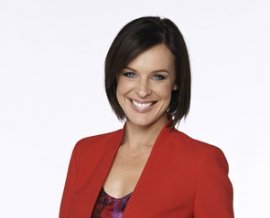