Matt Doran is an award-winning reporter and presenter with Network Ten. He also regularly hosts Ten’s Late News program, interviewing the biggest names in Australian politics, media, business and music. He is also an occasional co-host on Ten’s The Project.

Matt is an experienced host/MC across the corporate and charity sectors and a passionate ambassador for a number of non-profit organisations. On the issue of human trafficking he is a tireless advocate - working closely with a number of global organisations aiming to abolish the growing slave trade. In November 2012 his investigative efforts were recognised with a UN Peace Award for Best Television News.

Matt Doran has an extensive background in crime reporting and a wealth of international experience, having worked in print and TV newsrooms across Australia and also South America. Matt has played a key role in TEN's coverage of a series of natural disasters, including the devastating Christchurch earthquakes, the deadly mine explosion in New Zealand's North, the Christmas Island boat tragedy and the tsunami which obliterated North-East Japan. More recently he filed a series of exclusive investigative pieces from the Philippines on the world’s fastest growing crime: human trafficking.

Late last year Matt was among the first reporters on the scene of the unprecedented collar bomb hoax in Sydney. Matt Doran’s coverage led the way for TEN, securing network exclusives on a story that demanded international attention. In South America Matt worked as a features/news reporter covering everything from violent tensions between feuding drug gangs in Buenos Aires, to rare Shamanic rituals in the heart of the Peruvian Amazon.

Prior to joining Ten’s Sydney newsroom in 2010, Matt worked for several years as a general news reporter and then police reporter for TEN in Melbourne and Adelaide. He has fostered an extensive network of contacts and has a proven history of exclusive stories. Throughout 2006 Matt worked as a police reporter with Melbourne's Herald Sun newspaper, covering fires, floods, gangland wars and CBD shootings. In the four years prior he held a position as an awarded reporter and senior editor across a number of mastheads within News Ltd's Leader newspaper group.

Matt Doran also undertakes regular speaking engagements for corporate clients and charities. He is an ambassador for Project Futures, an anti-trafficking charity aimed at stamping out the trafficking of woman and children into Australia and throughout Asia for the purposes of sexual exploitation. He is also an ambassador for Australia’s Bravehearts Foundation – which supports child victims of sexual assault.

Matt has worked as a regular MC at events for Stihl Australia and pre-match AFL functions for the Essendon Bombers. Given his background in crime reporting, Matt has also been invited to host key annual functions for the NSW Police Association, attended by the state’s top cops and politicians.

Matt is also a keen supporter of the charity Swags for the Homeless – a very worthy organization which provides bedding for Australia’s homeless people - volunteering his time for their TVCs.

At tertiary level, Matt graduated from Melbourne University in 2003 with a Bachelor of Media and Communications (enriched journalism major). Matt also completed the News Limited cadetship with a high distinction. Throughout his time as a journalist Matt's appetite for hard news, compelling yarns and stories that make a difference has only increased. He is passionate about breaking news and investigative reporting. 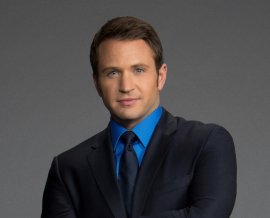