Holding over 25 years’ experience in radio, Grubby and Dee-Dee (otherwise known as Peter Stubbs and Diane Dunleavy) are some of Melbourne’s favourite presenters. Their combination of humour, interesting stories and contagious enthusiasm has kept them a loyal audience for over two decades.

Ruling the radio waves in the 1980, their voices could be found on Fox FM as part of the Fox Morning Crew. They were even crowned King and Queens of Melbourne radio by the Lord Mayor. After working at Fox FM, Grubby and Dee-Dee moved to Gold 104.3, hosting the Breakfast Show for 13 years.

The pair have interviewed over a thousand celebrities over their careers from actors Harrison Ford, Matt Damon, Steve Carrell and Daniel Radcliffe, to musicians Chrissie Amphlett and Billy Joel.

In 2012, they were signed as the Weekend Break team for 3AW over summer.

Grubby studied at Wesley College before working in the rag trade. He then joined his brother, ABC presenter Richard Stubbs on 3XY in 1985. He is an avid South Melbourne and Sydney Swans supporter and ambassador, hosting club functions across the nation.

Dee-Dee worked as a journalist at Standard Newspapers before joining the Fox FM newsroom in 1986. In 2011 she went into the pages of Australian radio history when she reached 25 years on-air. She is a committee member of the Saints Heart and regularly hosts St Kilda club functions.

Both are avid charity supporters, donating and dedicating their time to several including the Breast Cancer Network, the Leukaemia Foundation, the Bonnie Babes Foundation, Starlight Foundation, the Muscular Dystrophy Association and Petstock Foundation.

Popular and entertaining event hosts, Grubby and Dee-Dee have been involved in the success of multiple events, covering a range of events from functions, intimate lunches to presenting the bushfire benefit concert Sound Relief in 2009.

Comfortable in front of any audience, their extensive experience and engaging stage presence will leave your audience feeling entertained and at ease. 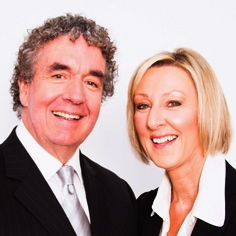