A presenter, host and MC looking to inject fun into events

Abbey Gelmi's quick thinking and bright personality, makes her perfect for a role in live television. She relishes in the challenges of breaking news and has learned impressive skills to adapt to the pressured environment. With a recognisable personality and voice, Abbey is a great addition to any event as a host or facilitator.

With a distinctive voice, she has been used frequently by FOX Sports, in advertising, promotions and as the voice of the Fox League Channel. Abbey has also been a key part of the National Bastketball League commentary team including being the only presenter to be a part of all three NBL17 Finals Series' games.

Abbey's friendly personality has seen her build strong rapport with some of the nation's biggest basketball names including Joe Ingles, Patty Mills and Andrew Gaze.

Combining her love for both sports and fashion, Abbey was the host of the NBL's MVP Red Carpet. She has also hosted 'Fashions on the Field' alongside Vogue Australia editor Edwina McCann several times.

A regular MC and host, Abbey has spoken at several events including those held by brands Moet & Chandon, TAB and Longines.

Highly experienced and knowledgable , Abbey Gelmi is a presententer, host, reporter, MC and writer, who aims to inject some fun into every event. With infectious enthusiasm, she has an innate ability to connect with each audience member and create a memorable event environment. 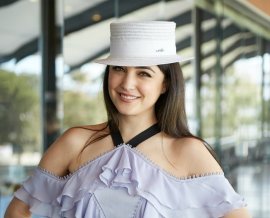