In July 1960, at the age of 26, Jane Goodall traveled from England to what is now Tanzania and ventured into the little-known world of wild chimpanzees. Equipped with little more than a notebook, binoculars, and her fascination with wildlife, Jane braved a realm of unknowns to give the world a remarkable window into humankind’s closest living relatives. She took an unorthodox approach in her field research, immersing herself in their habitat and their lives to experience their complex society as a neighbor rather than a distant observer and coming to understand them not only as a species, but also as individuals with emotions and longterm bonds.

Dr. Jane Goodall’s discovery in 1960 that chimpanzees make and use tools is considered one of the greatest achievements of twentieth-century scholarship. Her field research at Gombe transformed our understanding of chimpanzees and redefined the relationship between humans and animals in ways that continue to emanate around the world. On the path to becoming the world’s leading primatologist, Dr. Jane Goodall redefined traditional conservation.

In 1977, she founded the Jane Goodall Institute to support the research in Gombe and scale up the protection of chimpanzees in their habitats. In the late 1980s, it became clear that Gombe was only part of the solution to a much bigger, rapidly growing problem of deforestation and declining chimpanzee populations across Africa. Knowing that local communities are key to protecting chimpanzees, she redefined traditional conservation with an approach that recognizes the central role people play in the well-being of animals and habitat.

In 1991, when a group of young people confided their own deep concerns, she invited them to co-found Roots & Shoots, a program at work with young people in 100 countries to foster the informed generation of conservation leaders our world so urgently needs.

In 2002, Jane became a UN Messenger of Peace, and was invested as Dame of the British Empire in 2004.  She delivers fascinating speeches on humanitarian, socio-ecology, conservation and issues affecting the developing world, and is a highly accomplished public speaker.

She has also featured in many popular television documentaries and has written an extensive number of books, including two overviews of her work at Gombe, two autobiographies in letters, her bestselling autobiography and many children’s books.

Today, Dr. Jane Goodall travels around the world, writing, speaking and spreading hope through action, encouraging each of us to use the gift of our life to make the world a better place. Jane is recognised as the female David Attenborough and is one of the best speakers worldwide on conservation, green issues, climate change, ecology and planet earth. She is a riveting and engaging corporate and after dinner speaker.

Making a Difference: An Evening with Jane Goodall
Dr. Goodall will first bring her audience into the world of the Gombe chimpanzees, from her early observations and experiences to the latest news and stories from the field. Jane also shares information about the work of the Jane Goodall Institute as well as an insight into the person behind the globe trotting international icon: a UN Messenger of Peace, Dame of the British Empire, and the subject of countless articles and television programs around the world. She will also discuss the current threats facing the planet and her reasons for hope in these complex times, encouraging everyone in the audience to do their part to make a positive difference each and every day 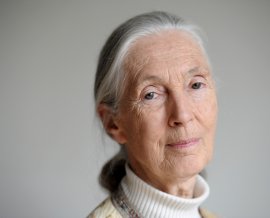