Described by the Financial Times’ Chief Economic Writer Martin Wolf as “a brilliant man who deserves to be better known”, and by former Finance Minister Lindsay Tanner as “Australia’s foremost public intellectual”, Nicholas Gruen is a policy economist, entrepreneur and commentator on our economy, society and innovation.

He is CEO of Lateral Economics, Chairman of global aged care software provider Health Metrics, and the Open Knowledge Foundation (Australia) and Visiting/Adjunct Professor at Kings College London Policy Institute and Adjunct Professor at UTS Business School. In the 1980s he was a school teacher and a cartoonist.

He is Patron of the Australian Digital Alliance, comprising Australia’s libraries, universities, and digital infrastructure providers such as Google and Yahoo.

He was a Council Member of the National Library of Australia (2014-16), chaired the Federal Government’s Innovation Australia (2013-14) and chaired The Australian Centre for Social Innovation (TACSI) (2010-16).

He was the founding chair of Kaggle which was recently sold to Google and an international start up investor.

He has advised Cabinet Ministers, sat on Australia’s Productivity Commission and founded Lateral Economics and Peach Financial in 2000. He’s had regular columns in the Courier Mail, the Australian Financial Review, the Age and the Sydney Morning Herald and has published numerous essays on political, economic and cultural matters.

He was on the Cutler Review into Australia’s Innovation System in 2008, and the review of Pharmaceutical patent extensions in 2013.

Detoxing Our Democracy: A new role for ordinary people in politics
Discover how by creating space for ordinary people to influence our politics at every level could see our democracy reborn.
Economics: What is it good for?
In this talk, Dr Gruen will show you how poor economics has been at answering the questions many ask of it, but how it could be used to make the world a better place.
Five Ways Innovation Talk is Too Vague to Help Anyone
Discover how the extended technology stack can really promote innovation
How did New Zealand lose the race against Australia?
New Zealand had the highest living standards in the world at the turn of the 20th century. By 1970, its income levels were the same as Australias. And yet a generation later, they are around 20 per cent lower. Dr Gruen explores these facts and also looks at various theories as to how it happened.
How the Internet is Changing Our Economy and Our Lives
While we have been reforming our economy in the image of a normal market, something huge has happened. A whole slew of new public goods has been built. And most have been built privately. This calls for a whole new agenda. What do those new goods look like? And how do we start?
How to Protect Your Organisation from Our Toxic Politics
Dr Gruen shows how self appointed spokespeople are usually hugely unrepresentative of the group they claim to be representing and explores ways your organisation can cut through to deal with the people themselves.
How We Are Wanting Change We Can Believe In Before Change we Need
The young want change, as well they might. But not all change is worth having. And change makers use the tools of marketing to convince us of the value of their causes. In this talk, Nicholas Gruen will interrogate change making and conclude that some of the causes we are invited to get caught up in are unlikely to achieve much and might even make things worse. Meanwhile, other changes we need to make are as urgent as ever.
How We Blew It In International Negotiations
In this presentation, Dr Gruen explores the basic economics of Intellectual Property and suggests some principles to which we should adhere in negotiating international agreements; principles we have ignored so far.
Is GDP All There Is? Better approaches to measuring our well being
In this talk, Dr Gruen will explain why GDP is not all that bad. But not for the reasons you think. He will also explain why many attempts to provide more holistic measures of wellbeing amount to little more than distractions.
Not Drowning, Waving: Education and the revolution of web 2.0
Dr Gruen will describe the opportunities and challenges that face formal learning with the unfolding use of web technologies.
Nudging Towards Innovation
Dr Gruen discusses the myriad ways governments can promote innovation without spending money. This is the Innovation without money agenda he championed as Chair of Innovation Australia.
Six Ways to Tell if You Are REALLY Thinking Strategically
It is crucial for your business to get its strategy right. Often, we go away and agree on some central goal and then work out how you will get there working down from high levels to detail. Yet, this is a kind of anti thinking. The goals and capabilities you need to get there are interdependent. Dr Gruen will look at six things you really need to do to get your strategy as good as it can be.
The Culture Wars: How they’re holding us back and what to do about it.
Dr Gruen shows how culture wars work in education, in economics, in health and in many other areas before explaining how we can tackle culture war and build a better world.
Want Your Business to be Smart? Maybe Try Not Being Stupid.
There are hundreds of cognitive biases, many of which get stronger in groups, particularly hierarchical groups. That’s pretty much every organisation. What are these biases and how can you and your business protect yourselves?
Why Aren’t Business Decisions More Evidence Based and What Can We Do to Make Them So?
In this talk, Dr Gruen will show how you can revolutionise the performance of your business by using expertise first developed to measure and track the effectiveness of value creation in the business and report it independently to all stakeholders.

Nicholas was extremely professional and set the scene beautifully for the Congress. Well prepared and stayed back to answer any questions. His presentation was informative, precise and extremely well received 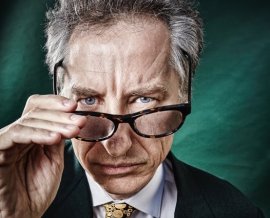