Focussing on improving the health and wellbeing of all Australians

Dr Andrew Rochford became a household name as The Block Doc in 2004 after winning the Top rating Television series The Block, and from that point on his media career has thrived. Andrew was the popular co-host on the Channel 10 show, ‘The Project’. His engaging and vibrant personality, style, and accomplished skills as a TV presenter saw him ease into a new and thrilling role co-hosting Sydney’s Mix 106.5 radio station’s breakfast program, The Brighter Side of Breakfast with Claire Hooper in 2011. In 2014, Rochford joined the Seven Network as the networks National Medical Editor.

Andrew presented many shows over a number of years at Channel 9 including “What’s Good for You” the ‘Waiting Room’, a medical-based factual reality program, ‘You Saved My Life’ and ‘Amazing Medical Stories’ which Andrew narrated and hosted. Through these shows, Andrew combined his history and experience in medicine and quickly developed his popularity and skills as a broad based TV presenter and host.

Andrew is a graduate of The University of Sydney Medical School (Bachelor of Medicine/Bachelor of Surgery), finishing the graduate medical program with honours. Dr Rochford also holds a Bachelors Degree in Medical Science from the University of Sydney, majoring in Anatomy and Neuroscience. Andrew’s work was published in the journal Neurosurgery as part of a research project for the Cerebrovascular Centre at Royal North Shore Hospital.

Andrew is an ambassador for a numerous causes and charities, with his main support and area of focus being on health related issues in our community and the promotion of an active lifestyle for all Australians.

Andrew is a keen outdoors person who counts running as one of his passions and enjoys swimming, skiing, basketball and golf in his spare time. He is a devoted husband and father of three young children – a boy and twin girls, and when he is not gracing our TV screens he can be found spending time with his family, on his much loved Northern beaches.

Andrew’s knowledge, and charisma teamed with his witty and warm personality has ensured his appeal to a broad national audience. Andrew continues to be in high demand as a keynote speaker and master of ceremonies as well as one of Australia’s most popular talent.

To enquire about Andrew Rochford for your next conference or event please contact the Keynote Team on 1300 661 904. 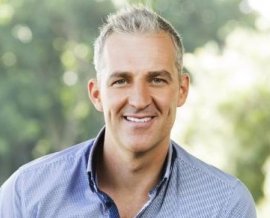