Highlight performances include dancing for the Queen of England at the Commonwealth Heads of Government meeting (CHOGM) and during the Olympic Games 2000 in Sydney for the Prince and Princess of Belgium.

The performers have a wealth of experience performing at Citizenship Ceremonies, Departmental Heads of Government at international, national and Local levels including tourist venues (Mirrabooka Aboriginal Cultural Experience) and as part of ARC Dreaming in traditional/ contemporary theatre performance both locally and on the world stage

The directors of the dance troupe are descendants of the Nunukul, Yuggera, Yugimbir and Nugi tribes.  In the south east corridor there are 4 major tribal language groups of the coastal region.

Nugi are the Aboriginal people of Moreton Island, known in the language group as Mugumpin. The Nugi moved in the settlement times to Stradbroke Island, Cherbourg and other various areas, but have still maintained a rich heritage with one of the most beautiful languages spoken in the south east. 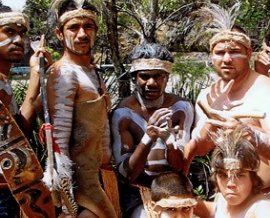