Swagamama is a dance act with a difference.

Cleverly choreographed routines and music arrangements, combined with an outright passion for what they do, Swagamama have captivated audiences of all ages. Fun and entertainment is their speciality; dancing is merely their tool to achieve that goal.

As seen on TV shows including Channel 10’s Everybody Dance Now, The Shak, Toasted TV, Totally Wild, Sunrise and ESPN, Swagamama have featured in international music videos and advertising campaigns.

One of the hottest acts of 2014, they are now constantly in demand for key performances and provide international standard entertainment for Australia’s most high profile companies, events and organisations.

Swagamama's notoriety as a performance troupe is skyrocketing due to their unique combination of mime, theatre, spectacular and high level dance skills. 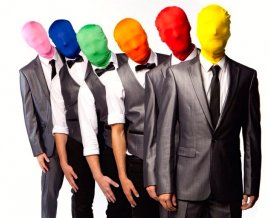