Sally Cooper is a passionate and highly sought-after musician. She offers a unique sound to Australia’s buzzing music industry.

Playing violin from a young age, Sally’s talents were nurtured and saw her perform everywhere, from the school concert hall to the stage, to orchestras and national television. She has since toured with some of the biggest names in music, including Rod Stewart, Michael Buble, Delta Goodrem, Guy Sebastian, and Ronan Keating.

Sally has worked on a number of television shows including with the string section on ‘The Footy Show’, and in a string quartet for ‘Dancing with the Stars’ and ‘It Takes Two’.

As a violinist, Sally was drawn to classical sounds, however, after graduating from the Australian National Academy of Music, she found the pop genre. Combining the two genres into a contemporary style, Sally found herself her own signature sound, which remains heard in her music today. 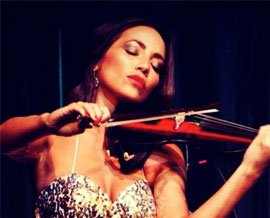